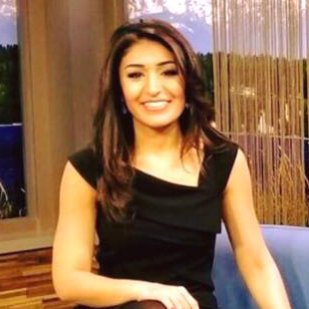 I am so thrilled to be back home in Seattle as a reporter for Q13, a station I grew up watching. My family moved to Seattle from Yerevan, Armenia during the collapse of the Soviet Union when I was five years old. English is my fourth language. I’m fluent in Armenian and speak Russian and French. My global upbringing has helped me to better connect with the people I interview and shed light on unique perspectives in our community. Storytelling has always been a part of my life; my earliest memories are of picking up anything I could find, using it as a microphone and rambling in front of my dad’s camcorder non-stop about what happened that day.

Being a journalist is my childhood dream come true, I take great pride in sharing your stories and informing the public about current events. There’s also something extra special about getting to do what I love in my hometown.

Before joining Q13 FOX in February 2017, I was a host and reporter for CityStream, a newsmagazine show on the Seattle Channel. My career has spanned coast to coast. Prior to returning home to Seattle, I was reporting at the CBS/FOX affiliate, WPRI-TV in Providence, Rhode Island. There, I covered multiple breaking news stories each day and reported on major national trials including the Boston Marathon bomber, Dzhokhar Tsarnaev, and the NFL’s Aaron Hernandez. I also covered the historic blizzard of 2015 in one of the hardest hit spots, as New England got more than 30 inches of snow.

Before moving to the East Coast, I was the primetime anchor and reporter at the CBS/ABC affiliate KIFI/KIDK-TV in Idaho Falls. There, I was able to leverage my skills as a reporter, anchor and producer and take the shows I anchored to the number one spot in the market. While in Idaho, in addition to daily assignments, I covered the nuclear industry beat and the health beat, where I spearheaded a series to help the public through the roll-out of the Affordable Care Act. International stories are one of my favorite topics and at that station I launched a segment with a former White House official on current international affairs discussing everything from the rise of ISIS to U.S-Russia relations. Before making the move to television, I was a print and radio journalist. I started my career at the NPR affiliate in Seattle, KUOW Public Radio, where I worked my way up from intern to eventually anchoring the hourly newscasts.

Aside from journalism, I have many interests. I am active in our community, emceeing several events a year bringing my storytelling skills to help the causes I believe in thrive in our city. I serve on the board of directors for S.O.A.R, a non-profit providing humanitarian relief to Armenian orphans around the world. I’m also an avid tennis player and a former gymnast and figure skater. Now that I’m back in my hometown, I’m so happy I get to see my friends and family more often.
I love connecting with viewers, so if you have story ideas, please don’t hesitate to email me at tatevik@13fox.com or connect with me on Facebook.