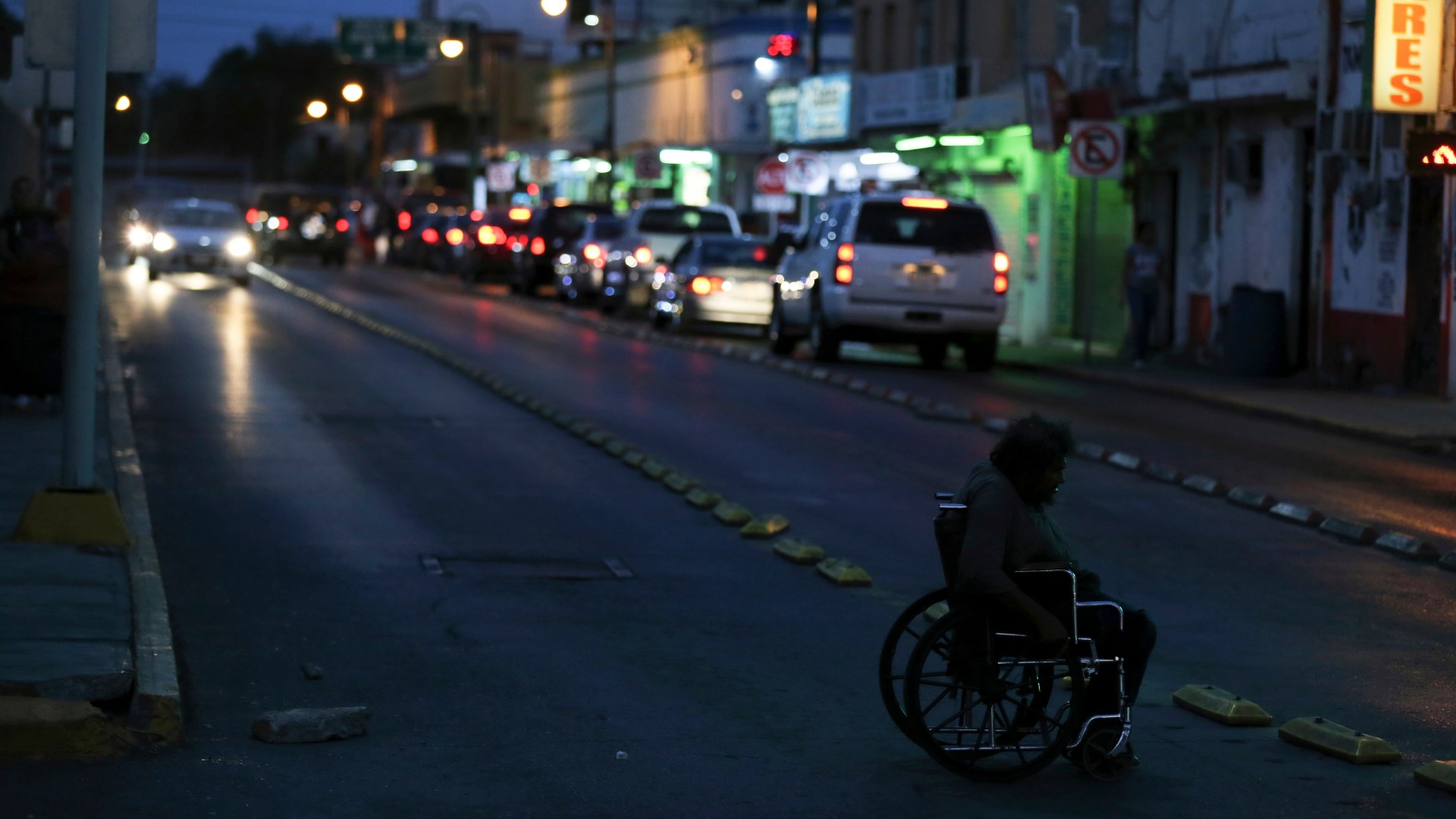 A man crosses the street in a wheelchair near the International Bridge 1 border crossing in Nuevo Laredo, Mexico, after sunset Monday, Sept. 16, 2019. (AP Photo/Fernando Llano)

McALLEN, Texas (Border Report) — A weekend of street violence in Nuevo Laredo, Mexico — the border city across from Laredo, Texas — has prompted the U.S. government to warn employees “to shelter in place.”

The violence, which is being attributed to fighting between drug cartels and Mexican military, has left vehicles burned on the streets and “multiple gunfights and blockades,” according to a post on social media by the U.S. Consulate in Nuevo Laredo.

The U.S. Consulate on Saturday issued a dire warning to its employees and imposed a nighttime curfew. It also warned that Americans should notify friends and family of their whereabouts and to monitor the situation before leaving venturing out, and to avoid public places.

“The consulate has received reports of multiple gunfights and blockades throughout the city of Nuevo Laredo. U.S. government personnel are advised to shelter in place,” a consulate post read.

U.S. government personnel are subject to restrictions on their movements and an evening curfew until further notice.
Actions to Take:
Notify friends and famUily of your safety.
Monitor local media for updates.
Avoid public places.

Francisco Galvan, a representative to the Texas Tamaulipas Trade Office and an adviser to Tamaulipas Gov. Francisco García Cabeza de Vaca, confirmed to Border Report on Monday the violence occurring in Nuevo Laredo, which is located in the state of Tamaulipas.

“There is a little bit of instability in Nuevo Laredo caused by two different groups of organized crime,” Galvan said via phone. “U.S. officials have issued a warning to American employees not to travel, to stay put.”

Galvan urged Mexican federal forces to be more aggressive and said they need to take control of the situation. “It’s a very unfortunate situation that we are trying to understand not only in Nuevo Laredo but in many parts of Mexico,” he said. “The federal government has to do its part to send in troops to get this under control.”

Widespread violence elsewhere on the border has occurred recently in Reynosa, which is across from McAllen, Texas, as well as in Ciudad Juarez, across from El Paso, where there also have been several vehicles burned and days of gangs shutting down streets.

Freshly dug graves that contain the remains of Rhonita Miller and four of her young children are overspread with flowers a day after their burials, at the cemetery in Colonia LeBaron, Mexico, on Nov. 9, 2019. (AP Photo/Marco Ugarte)

Two weeks ago, three women and their nine children, who were all U.S. Citizens, were killed on a rural highway by what Mexican officials say were drug cartels in the Mexican state of Sonora.

In Juarez and Nuevo Laredo, many of the migrants who are waiting to seek asylum in the United States also are finding themselves victims of this street violence.

The New York Times reported one death associated with the violence in Nuevo Laredo.

Galvan said Sunday saw a brief respite from the street fighting, which began on Friday and lasted through the weekend.

Read Border Report stories on the slain American women and children and migrants in Juarez trapped by violence.

On Saturday, Nuevo Laredo Mayor Enrique Rivas Cuellar issued a statement on his Facebook page about the violence. “Since early today, the municipal government has been working to restore traffic order in the city after the regrettable incidents from [Friday],” he wrote. “I reiterate my commitment and obligation to continue working hand in hand to achieve your tranquility and the well-being of everyone.”

Border Report is monitoring the situation and will update this story as needed.

Sandra Sanchez can be reached at SSanchez@BorderReport.com.

Visit the BorderReport.com homepage for the latest exclusive stories and breaking news about issues along the United States-Mexico border

Listen to the Q13 Extras Podcast!

Every day the Q13 Sports department has three minutes and thirty seconds to tell you the most important sports news of the day. Sometimes, that’s not enough — this is all of the Extras.