Employers and workers together are spending close to $20,000 for family health insurance coverage in 2018, according to a new Kaiser Family Foundation report.

Although premiums have increased fairly modestly in recent years, the growth has far outpaced workers’ raises over time. The average family premium has increased 55% since 2008, twice as fast as workers’ wages and three times as fast as inflation, Kaiser’s Employer Health Benefits Survey found.

Deductibles also continue to burn a deeper hole in workers’ pockets. The average deductible now stands at $1,350, up 212% since 2008. That’s eight times faster than wage growth. 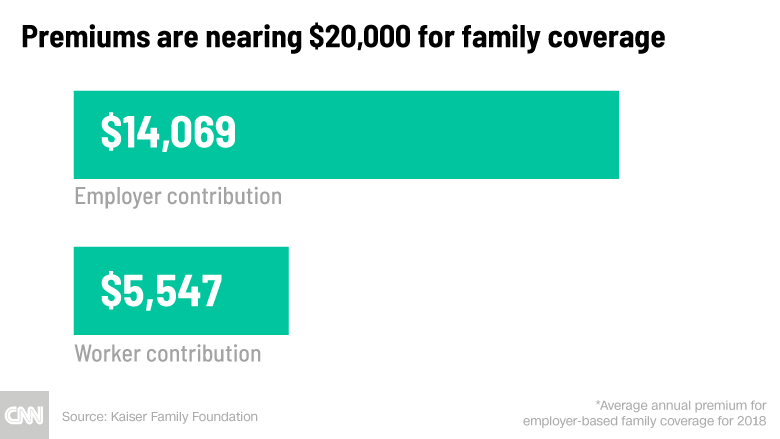 Employers have sought to limit premium increases by raising deductibles instead. But large deductibles are among Americans’ main complaints about their health coverage.

“As long as out-of-pocket costs for deductibles, drugs, surprise bills and more continue to outpace wage growth, people will be frustrated by their medical bills and see health costs as huge pocketbook and political issues,” said Drew Altman, Kaiser’s president. 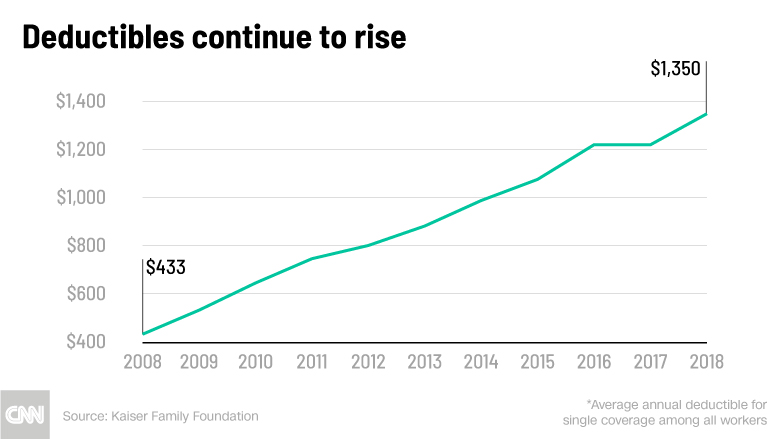 While employers have been trying to rein in health care costs for years, the issue has come into the spotlight once again.

Amazon, Berkshire Hathaway and JPMorgan Chase announced earlier this year that they were joining forces to give their combined 840,000 employees better health care choices and bring down costs, both for their workers and their companies.

Related Story
CBO: US debt this fiscal year will be highest since World War II

A growing number of companies are also contracting directly with hospitals and providers to take care of their workers, according to a National Business Group on Health study released in August. General Motors and Henry Ford Health System in Detroit recently set up such a contract. The six-hospital system will provide access to more than 3,000 primary care and specialty doctors, as well as hospital, emergency room and pharmacy services, to nearly 24,000 salaried GM workers and their families.

Related Story
Amazon could radically change how you get prescriptions

Some employers are looking to limit their networks to certain high-quality providers, which allows them to lower costs. Some 11% of companies said they’ve implemented these performance-based networks, up from 3% in 2014, according to a survey released earlier this year by PwC, a consulting firm. Another 34% of firms said they were considering these networks.

More large companies are offering coverage for telemedicine visits with providers, such as through videoconferencing or remote monitoring. The share skyrocketed to 74% this year, up from 27% in 2015, according to the Kaiser study.

Employees, however, have yet to embrace the new technology. Only 0.51% of those in large employer plans had at least one telemedicine visit in 2016, the latest data available.

“Lots of companies are paying for telemedicine, but very few employees are using it,” said Matthew Rae, senior health policy analyst at Kaiser.